The Organization (“Org”) segment of the FOAPAL should reflect the financial organizational structure of the University and align with the operational academic structure where appropriate.  This means that organizational units or departments should be represented by a unique Org number and that the hierarchy for how Orgs are grouped for reporting should reflect the reporting structure of the institution (e.g., Departments roll up to a College/Division, which in turn roll up to the Provost/SVP, etc.).  See separate principles related to hierarchy levels and definitions below.  Transactions are recorded at the lowest level in the Org hierarchy (L6 or L6B level), within the department or program responsible for managing their approved budget.  Most units will have L6A as the lowest level.  There are occasions where a 6B organization may be needed, primarily for departments that are broken into smaller units, or where a temporary organization is needed – for example, establishing a new program that may or may not become a new academic department.  In addition, 6B organizations are used for student organizations that need an organization code to reserve space on campus.

An Organization may be funded by multiple sources (identified by different Funds) and be associated with multiple Programs, Activities, and Locations.  The Organization can be used in reporting to display the financial status of the entire department, including all types of financial activity that the department is responsible for (E&G, Grants, Start Ups, Indirects, etc.) 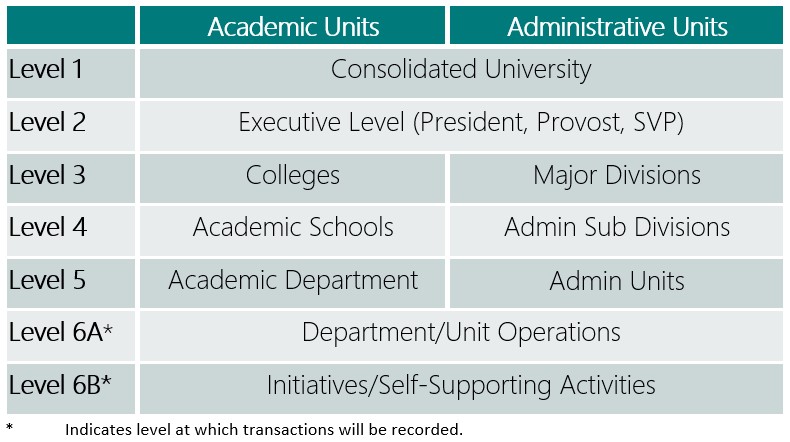 Note that while there are structural differences between the Academic and Administrative sides of the structure, comparability is maintained — particularly at the highest and lowest levels of the hierarchy.  Some branches of the hierarchy with less organizational complexity will see redundancy between the levels as described below. The value in placing “like items” consistently at the same level is supporting meaningful reporting with the capability to drill down into more granularity when appropriate.  We can also use a specified level for consistent internal control points across the institution.

Organization use in HR

Transactional (L6A/L6B) Organizations are used in various places for HR and Payroll purposes.